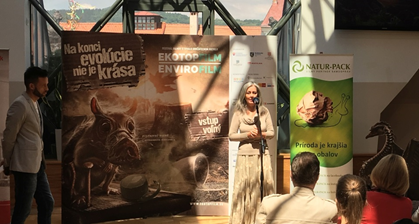 NATUR-PACK became a general partner  of the latest volume of the international film festival EKOTOPFILM - ENVIROFILM 2017. A record-breaking number of movies was registered to the actual festival when considering its 43-years history – more than 1000 films.

The dominant idea behind the actual volume is expressed by the motto "The evolution will not come to a beauty at its end". The film festival campaign is based on the period of Anthropocene, a geological era significantly influenced by the human activities. In considers also the issues of evolution, plants, animals that shall adapt to the deteriorated ecosystems if the human race will not intervene against the environmental devastation very soon.

Film festival was officially opened by the EKOTOPFILM - EVIROFILM team on May 22, 2017 in the premises of the City Hall of Banská Bystrica, with the participation of the city representatives, Ministry of Environment SR, evaluation committee and partners of the event.

Polly Higgins became a noble guest of the latest festival, a world-known lawyer acting as an “Earth defense lawyer“ due to her tenacity in the defense against the environmental crimes.

In parallel with the opening ceremony of the film festival in Banská Bystrica hundreds of pupils in the elementary schools in Bratislava participated on so called “Junior Festival”, where they joined the eco-educational event of NATUR-PACK in the framework of a new programme – “Do not throw everything to the same bag”.

The children were playfully trained in the proper waste separation according to the system developed for Bratislava.

Programme of the film festival is available here:

Discussion on the waste issues in Bratislava will be held on Friday – May 26, 2017.