Waste Act amendment is not merely about the plastic carrying bags! 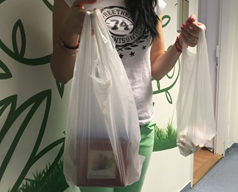 The Slovak Parliament adopted the Waste Act amendment on its 14th session on March 23, 2017 by voting of 123 members of the Parliament. The main idea of the adopted amendment is the payment for the light plastic carrying bags with effectiveness by January 1st, 2018. The vendors shall ask for payment, but they shall also offer alternative types of bags or reusable bags.

“The Act amendment has a primary target – to reduce the consumption and production of light plastic bags by a simple measure – asking for payment. Light plastic carrying bag became a symbol of unreasonable environmental burden. It is generating waste very quickly. They often serve to the customer for a period shorter than an hour – for transportation of the purchased goods home. In contrary, the environment needs decades to degrade such bag. Freely available plastic bags represent a luxury that is not acceptable any more,” claimed recently Minister of Environment Mr. László Sólymos.

Plastic bags become a waste very quickly and their appearance in the environment increases. Light plastic carrying bags representing the majority of the total amount of plastic bags in the EU are not reused. They generate a waste very quickly. An average inhabitant of Slovakia uses app. 466 plastic bags per year according to the statistics of the European Commission. An European Directive forces Slovakia to reduce the number of used plastic carrying bags.

The amendment shall come into force (except of plastic carrying bags) by May 1, 2017.

According to the above mentioned legislation arrangements, PRO NATUR-PACK will have to rearrange its contractual relationships with many of its partners and customers.